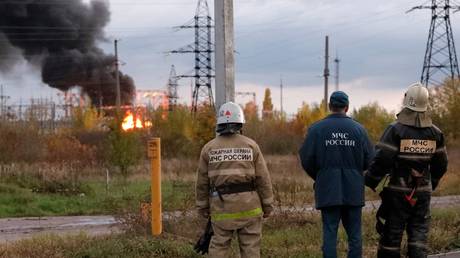 The attack sparked fires and disrupted electricity supply for some 2,000 people

The Ukrainian military struck an electrical substation in Russia’s southern region of Belgorod on Tuesday, local authorities have said. The attack on the facility, located in the village of Shebekino, sparked a fire at a transformer and disrupted power supply for some 2,000 people in the area.

Footage circulating online shows the transformer at the substation on fire, with a thick plume of smoke visible many kilometers away from Shebekino.

The attack inflicted only material damage with no injuries reported, according to local officials. It was not immediately clear whether the substation was subjected to artillery or rocket fire. The attack disrupted electricity supply in the area, with some 2,000 people affected. The local authorities promised to restore power within several hours.

The border areas of Russia’s Belgorod Region have repeatedly come under rocket, artillery and drone attacks by Ukrainian forces amid the ongoing conflict. The latest incident comes a day after the Russian military launched a massive missile attack across Ukraine, targeting infrastructure and military installations.

The strikes came in retaliation for Kiev’s terrorist activities and repeated attempts to target Russia’s critical civilian infrastructure, in particular the attack on the Crimean Bridge over the weekend, Russian President Vladimir Putin said.

Russia sent troops into Ukraine on February 24, citing Kiev’s failure to implement the Minsk agreements, designed to give the regions of Donetsk and Lugansk special status within the Ukrainian state. The protocols, brokered by Germany and France, were first signed in 2014. Former Ukrainian president Pyotr Poroshenko has since admitted that Kiev’s main goal was to use the ceasefire to buy time and “create powerful armed forces.”

In February 2022, the Kremlin recognized the Donbass republics as independent states and demanded that Ukraine officially declare itself a neutral country that will never join any Western military bloc. Kiev insists the Russian offensive was completely unprovoked.