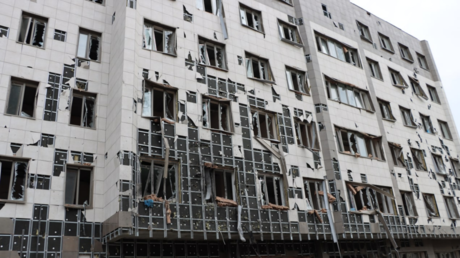 One person is reported dead after Ukraine strikes the city center, allegedly with US-made HIMARS rockets

Ukrainian forces have carried out an overnight attack on a hotel in the center of Kherson, local civil defense and emergency services wrote on their joint Telegram channel on Wednesday.

At least one person was killed in the shelling, and a number of residential buildings as well as a hotel, sustained damage, a local law enforcement officer told RIA Novosti news agency.

He added that the attack on the city was supposedly carried out using three HIMARS rockets, but the consequences of the shelling are still being clarified by Russia’s Investigative Committee. Emergency services continue working at the scene to clear the rubble.

Ukrainian forces have also continued to carry out attacks on other residential areas in Russia. The Mayor of Donetsk, Alexei Kulemzin, reported on Wednesday that at least three civilians had been killed in strikes on the city over the past two days.

Zaporozhye Governor Yevgeny Balitsky has also accused Kiev of trying to make life unbearable for the residents of newly incorporated Russian territories after Ukrainian troops carried out over 40 artillery strikes on and around Energodar, targeting the city’s gas-fired power plant in an effort to “derail” preparations for the winter season and make the city “unlivable.”

Russia took control of a large part of the Zaporozhye and Kherson Regions in the early phase of its military operation against Ukraine. The regions voted in referendums last month to join Russia. On Wednesday President Vladimir Putin signed into law four treaties, which formalized the transfer of Zaporozhye and Kherson, as well as the republics of Donetsk and Lugansk to Russian sovereignty.

Kiev has rejected the ballots and the change of status and pledged to use military force to oust Russia from all lands that Ukraine considers its own. Ukraine’s President Vladimir Zelensky claimed that he wants all people living in what his government terms “temporary occupied territories” back under Kiev’s jurisdiction, but threatened to punish “collaborators” who cooperated with Russia.

Erdogan Responds To Greek Request For US Help