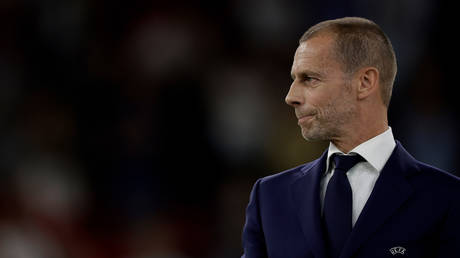 UEFA chief Aleksander Ceferin has stood by his organization’s decision not to ban Belarus from qualification for the 2024 European Championship.

Belarus was placed in Group I of the Euro 2024 qualification draw on Sunday in Frankfurt, alongside Andorra, Israel, Kosovo, Romania, and Switzerland.

Belarus must play ‘home’ games outside the country and without spectators, but figures such as the interior minister of Euro 2024 host country Germany, Nancy Faeser, had demanded that UEFA prevent Belarus from taking part in qualification altogether because of the conflict with Ukraine – just as it has done with Russia.

Belarus is an ally of Russia in the ongoing military operation in Ukraine, and both countries were the subject of a ban recommendation issued by the International Olympic Committee (IOC) back in February.

Russian football teams were subsequently banned from all UEFA and FIFA competitions until further notice.

But speaking to Bild in Germany on Wednesday, Ceferin defended his organization’s decision to include Belarus in qualification for UEFA’s quadrennial international showpiece.

“It’s a bit populist to demand: ‘Throw everyone out!’. We currently see no reason to do that,” Ceferin said.

“If things change, we will certainly react. Politicians should respect our decision-making authority. We also don’t preach to politicians and governments what to do,” he added.

“This is not today’s decision. The decision regarding Russian national and club teams and their suspension was taken ‘until further notice’, which means that until we decide otherwise, this will remain in place,” Ceferin said in Hvar, Croatia, after a UEFA Executive Committee meeting.

“That means we don’t have to take a decision whenever another competition comes up,” he added.

The European Championship will take place in 10 German cities in June and July of 2024, and will mark the first time Germany has held the tournament since 1988.

Belarus get their qualifying campaign for the competition underway on March 25 next year, when they face Switzerland.