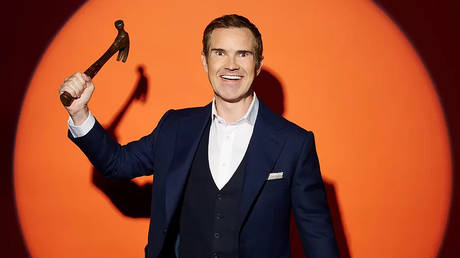 Channel 4 has defended the project, saying it helps explore “the limits” of free expression in art

A controversial TV show will offer its audience a chance to destroy Adolf Hitler’s paintings, as well as artworks by other “morally despicable artists,” Channel 4 confirmed on Friday. The statement, quoted by the Evening Standard, comes amid public outrage over alleged “trivialization of the horrors of Nazism” by the program’s creators.

According to a Channel 4 spokesperson, the ‘Jimmy Carr Destroys Art’ televised debate will represent “a thoughtful and nuanced exploration of the limits of free expression in art” as it will let the public in a studio decide on the future of several pieces.

“It speaks directly to the current debate around cancel culture and is in a long tradition of Channel 4 programming that seeks to engage a broad audience with the biggest and thorniest ethical and cultural questions,” the spokesperson said.

Channel 4 earlier revealed that it had also acquired a vase by Pablo Picasso, along with artwork by convicted pedophile Rolf Harris and sexual abuser Eric Gill. It hasn’t disclosed any further details about the objects, nor about their prices, just saying that they were bought “from reputable auction houses.”

“There are advocates for each piece of art. So you’ve got an advocate for Hitler. There’ll be someone arguing not for Hitler, but for the fact that his moral character should not decide whether or not a piece of art exists or not,” Ian Katz, Channel 4’s director of programming, explained in an interview with The Guardian earlier this week.

He revealed that if Hitler’s painting survives the show, Channel 4 will “appropriately” dispose of it.

The show, however, has sparked a public debate even before it airs. Olivia Marks-Woldman, chief executive of the Holocaust Memorial Day Trust, claimed that making Hitler “a topic of light entertainment” was “deeply inappropriate.”

“The question of how far art can be linked to its creators is an important one, but this program is simply a stunt for shock value, and cannot excuse the trivialization of the horrors of Nazism,” she told Sky News.

Marks-Woldman also criticized the choice of presenter, recalling a controversial joke by Jimmy Carr last year. Back then, Carr said a “positive” aspect of the Holocaust was the genocide of “gypsies” by Nazi Germany. These remarks were publicly condemned by many, including then Prime Minister Boris Johnson.

The Campaign Against Anti-Semitism also expressed its concerns over the plans for Carr’s program. ‘Jimmy Carr Destroys Art’ will air on October 25. Apart from the possible destruction of artwork by various means, the show will also feature surprises, stunts and public experiments conducted by prominent artists, Channel 4 said.