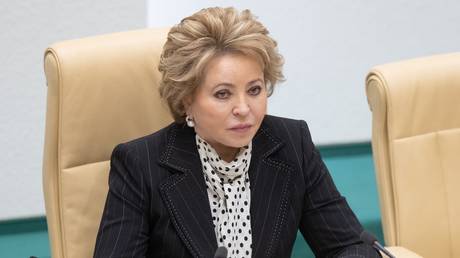 Moscow remains ready to look for a political solution to the conflict with Kiev, Valentina Matvienko says

The head of Russia’s Federation Council, Valentina Matvienko, has called on the Ukrainian parliament to immediately engage in peace talks with a view to settling the conflict between the two countries.

The proposal was made during the G20 parliamentary speakers’ summit in the Indonesian capital of Jakarta on Thursday. The Ukrainian delegation, headed by Verkhovna Rada chair Elena Kondratyuk, has also been invited to the event, despite the country not being part of the group of the world’s top economies.

The senator noted that Moscow and Kiev had almost reached a peace deal during talks in Istanbul in late March, but “Ukraine was obviously under external management at that time and gave up on those agreements.”

Russia has made numerous offers to Kiev to engage in peace talks since the outbreak of the conflict in late February, she pointed out.

“We are saying it again – we are in favor of negotiations, of dialogue, of a peaceful political solution to this crisis. Let’s start talking. Let’s get behind the negotiating table,” Matvienko suggested.

The head of the upper house of the Russian parliament later clarified to journalists that Moscow was “ready to cease hostilities on the conditions that are being put forward by Russia.”

This meant that the status of the Donetsk and Lugansk People’s Republics, as well as Kherson and Zaporozhye Regions, which officially became part of the Russian state on Wednesday, won’t be up for discussion during the negotiations with Ukraine, she said.

Matvienko said she wasn’t surprised by the lack of response to her proposal to start dialogue from the Ukrainian parliamentary delegation. “It’s understandable because Ukraine isn’t free in its decisions. It can’t make any decisions on its own, without the involvement of its masters,” she said, likely referring to Kiev’s backers in the US, UK, and the EU.

Earlier this week, Ukrainian President Vladimir Zelensky signed a decree that forbade any negotiations with Russian President Vladimir Putin. Zelensky claimed that Ukraine would only talk to Russia if it had a different president. The Kremlin responded to the move by saying it was ready to wait for the Ukrainian president to change his position or for Ukraine to find a new president with a different stance.