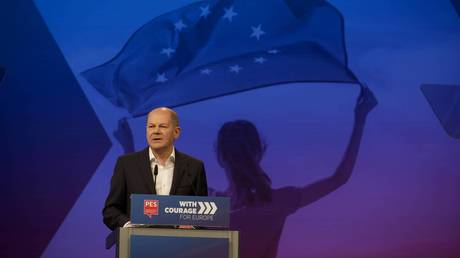 Apart from ditching the unanimity rule on certain issues, the bloc must admit more members, the German chancellor says

The EU must become bigger to live up to the role it plays in the international arena, German Chancellor Olaf Scholz said on Saturday. He also reiterated his call for major changes to the unanimity principle in the bloc.

“An EU with 27, 30, 36 states, with then more than 500 million free and equal citizens, can further strengthen its global position,” he told a gathering of the European Union Social Democrats in Berlin.

Scholz said he was “committed to the enlargement of the EU,” adding that the bloc’s further expansion to the east would be a “win-win for all of us.”

The German chancellor particularly identified Ukraine as a potential future member, adding that it, as well as Moldova, Georgia and the Western Balkan nations, “belong to us.” The “words must now finally be followed by deeds,” he said, pointing to the fact that some nations were promised EU membership years ago.

Scholz also maintained that the bloc must “take more responsibility” for its own security and strengthen its defense capabilities, citing a common air defense initiative as an example. Additional security measures could include a joint rapid reaction force and a joint EU military headquarters, he added.

The German leader also called for far-reaching reforms relating to the bloc’s decision-making process, specifically stating that the EU’s unanimity principle should be abolished to avoid situations in which certain decisions are blocked.

“In the foreign and financial policy, there must be a gradual transition to majority decisions,” he argued, adding that it would mean “no loss of sovereignty.”

Scholz did admit that such changes would require “a lot of convincing to do.” He has repeatedly called for the abolition of national vetoes in the EU in the past. Such proposals were vehemently opposed by Poland and Hungary. Warsaw accused Berlin of seeking a “dominant” position in the bloc and fueling its “imperialistic” tendencies, while Budapest demanded that veto powers be handed over to national parliaments.