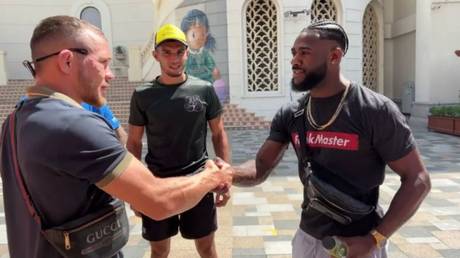 UFC bantamweight champion Aljamain Sterling has suggested he could meet Petr Yan in a trilogy bout, after the American bumped into the Russian in the UAE and the pair made a display of mutual respect.

The two rivals have already faced off on a pair of occasions. At UFC 259 in March last year, Sterling was handed the 135lb title after Yan was controversially disqualified for an illegal knee strike.

The months between the two meetings saw Sterling accuse Yan of doping, while the Russian claimed that Sterling had feigned injury to win the title.

Yan also suggested that Sterling was reluctant to face him again and overexaggerated the extent of a neck problem that resulted in him requiring surgery.

In a long-awaited rematch at UFC 273 in April that went the distance, Sterling won a split decision with many MMA fans and even UFC president Dana White taking issue with some of the scoring.

Six months later, the two fighters seem to have finally put their beef to one side.

As shown in a short video clip shared by Sterling on his Twitter account, they bumped into one another in Abu Dhabi in the build-up to UFC 280 and shook hands.

Yan appeared to ask Sterling when he had touched down in the UAE.

The Russian shook his former foe’s hand and that of his teammate Merab Dvalishvili, before Sterling wished Yan good luck in his upcoming fight with contender Sean O’ Malley at UFC 280 on October 22.

Sterling captioned the clip ‘trilogy’ with clinking beer glasses on Twitter, and it seems that Yan could be in line for another title shot if Sterling beats TJ Dillashaw in the co-main event to Charles Oliveira and Islam Makhachev’s showdown for the vacant lightweight title.

Fans online commended Sterling and Yan for being good sports.

“That’s maturity, class, and sportsmanship shown by both gentleman; really good stuff right there,” said one.

“Respect. Love to see it! Aljamain is such a great ambassador for MMA,” wrote another.