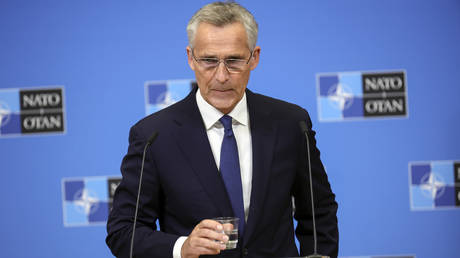 Despite tying the bloc’s fate to Ukraine, the secretary general still insists that the alliance is not a party to the conflict

NATO Secretary General Jens Stoltenberg told reporters on Tuesday that a military victory for Russia in Ukraine would spell defeat for the entire Western alliance. Despite providing “unprecedented support” to Kiev, Stoltenberg still claims that the US-led bloc is not a party to the conflict.

Addressing reporters on the eve of a meeting of NATO defense ministers, Stoltenberg declared that continued arms shipments to Ukraine are vital to ensure “that Ukraine wins the battle, the war against the invading Russian forces.”

However, this assistance has come at a price for the alliance’s own militaries. Germany’s weapons and ammo stocks have been critically depleted since late August. The same month, the Wall Street Journal reported that the US’ stockpiles of 155mm artillery ammunition were “uncomfortably low.” Asked whether weakening its own forces to strengthen Ukraine’s is a wise policy, Stoltenberg described the conflict in Ukraine as existential to the alliance.

“If [Russian President Vladimir] Putin wins, that is not only a big defeat for the Ukrainians, but it will be the defeat, and dangerous, for all of us,” he said.

NATO is heavily invested in Ukraine, with the alliance’s members providing training, intelligence capability, and tens of billions of dollars worth of weapons to the Ukrainian military. Despite this “unprecedented support,” Stoltenberg has repeatedly claimed that “NATO is not a party to the conflict.”

NATO leaders claim that their weapons systems have enabled Kiev’s troops to make a series of advances in the south and east of the country in recent weeks. However, with Moscow’s military operation under new command, these advances have come to a halt, and after two days of devastating Russian missile strikes on Ukrainian military and infrastructure targets, Kiev is once again pleading with the West for heavier and longer-range weapons.