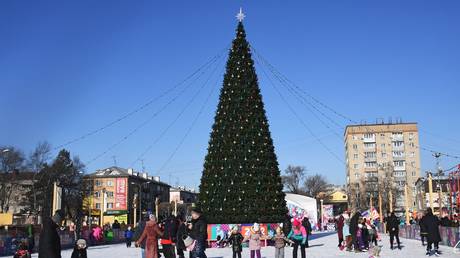 Funds reserved for the winter holiday celebrations are to be used to support draftees and their families, officials say

Almost a dozen Russian cities and at least three regions have decided to either cancel or limit the upcoming New Year’s Eve celebrations amid the protracted conflict between Moscow and Kiev, and will allocate the additional funds toward supporting people joining the Russian Armed Forces as part of the partial mobilization.

The mayor of the city of Kaluga, Dmitry Denisov, was one of the first to announce the measure on Wednesday. Kaluga, which is located just around 200 kilometers southwest of Moscow, would cancel all the festivities planned for late December and early January, he said, adding that it would be better to spend money on local draftees.

“The men should be equipped better than it is expected under regular supply standards,” Denisov said, adding that the city would not host concerts and fireworks displays and would instead “spend all the money” on supports for the local draftees.

By Friday, Denisov’s initiative has been supported by the heads of the Siberian city of Tobolsk, the northern city of Cherepovets and the city of Nizhny Novgorod, in the Volga region.

Mayor of St. Petersburg Aleksandr Beglov also said in a Telegram post that the city would cancel its traditional concerts at the Palace Square and Nevsky Avenue in the city center as well as a fireworks display. New Year’s Eve celebration events for children would, however, still go ahead as planned, he added.

The Russian city of Yekaterinburg announced it would not give up on all celebrations completely but would “review” its New Year’s Eve program. Apart from the various cities, at least three Russian regions – Leningrad Oblast surrounding St. Petersburg, the Belgorod Oblast bordering Ukraine and Kurgan Oblast in Siberia also announced transfers of money from the celebration funds to support programs for draftees and their families.

According to Russian media, people in the western Kaliningrad Oblast and in Voronezh Oblast in Central Russia are also calling on the regional authorities to join the initiative.

More than 200,000 draftees had joined the Russian army by October 4 as part of the mobilization effort, Defense Minister Sergey Shoigu has revealed. On September 21, Russian President Vladimir Putin declared a partial mobilization, looking to recruit some 300,000 reservists to take part in the ongoing military conflict with Ukraine, which began in late February.

The Russian Defense Ministry has since clarified that the mobilization prioritizes those who have served in the military and who’ve had previous combat experience as well as the necessary specializations needed on the front line.