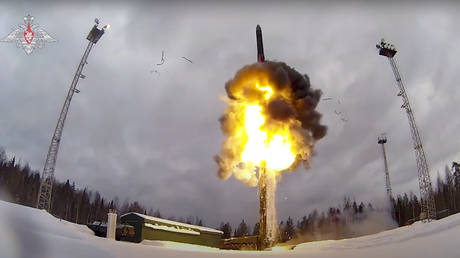 Despite alarm in the West, Estonia’s Margo Grosberg said using nuclear weapons would not be “reasonable”

Russia will not use nuclear weapons in Ukraine, because doing so would not be militarily “reasonable,” Colonel Margo Grosberg of the Estonian military’s defense intelligence center told reporters on Friday. Nevertheless, Western pundits and politicians have repeatedly invoked warnings of nuclear war.

“I stress that in military terms, the use of this type of a weapon is not reasonable in any way, it would not achieve an effect,” Grosberg said, according to Estonia’s ERR news broadcaster. However, amid reports in the British media that Moscow is preparing for exercises involving its nuclear forces, he added that “the nuclear threat must be kept in mind, but it is not very large.”

The Kremlin dismissed the British report, saying it would not partake in “nuclear rhetoric” with the West.

Talk of a possible Russian nuclear strike on Ukraine has reached fever pitch in the Western media in recent weeks, with American spies, diplomats, and President Joe Biden himself discussing such a strike as a realistic possibility. Speaking at a fundraiser in Washington on Thursday evening, Biden declared that “we have a direct threat of the use [of a] nuclear weapon if in fact things continue down the path they are going,” warning that a nuclear detonation would lead to “Armageddon.”

Meanwhile, Ukrainian President Vladimir Zelensky called on Thursday for NATO to launch “preemptive strikes” against Russia during a discussion on nuclear weapons. While Zelensky’s aides later said the Ukrainian president was not referring to nuclear attacks, Kremlin spokesman Dmitry Peskov said the statement amounted to an attempt to spark a world war, which would lead to “unforeseeable disastrous consequences.”

Russia’s current nuclear doctrine allows for the use of nuclear weapons in the event of an initial nuclear strike on its territory or infrastructure, or if the existence of the Russian state is threatened by either nuclear or conventional weapons. Before four former Ukrainian regions were incorporated into the Russian Federation this week, Russian President Vladimir Putin stated that he would defend these lands with “all the means available to us.”