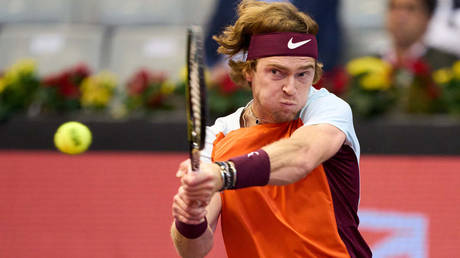 Russian top seed Andrey Rublev extended his winning streak over Dominic Thiem to four matches as he surged into Sunday’s Gijon Open final with a straight-sets win against his Austrian rival on Saturday afternoon.

The aggressive Rublev, currently ranked ninth in the world, looked every bit one of the sport’s top men’s players as he stormed past the 2020 US Open winner by a score of 6-4, 6-4.

However, Rublev came close to an embarrassing slip-up in the first set as he allowed Thiem back into the first frame despite at one point being 4-1 up, and on the brink of making it 5-1.

Rublev has been candid about some of the frustrations which he says occasionally find their way into his play and appeared to lose his cool towards the end of the first set as it seemed he had allowed Thiem a route back into a set he had previously been dominating.

A 4th final this season 👊@AndreyRublev97 has one eye on the race to the #NittoATPFinals! pic.twitter.com/P1DG0LZNsg

But the 24-year-old managed to regain his composure to put an end to Thiem’s fightback in the first frame – and has now won eight straight sets against the Austrian.

“When I was winning 4-1 with a break point for 5-1 it looks like the match is going my way and then I am at 5-4 with him serving,” Rublev said afterwards.

“That’s not easy to accept, but I was lucky I played a really good game and Dominic helped me out a little bit.

“Then I felt more confident and I was able to win in two sets, which was the most important thing. This week I have been playing really well and I’ll try to show my best tennis of the week tomorrow.”

Rublev, a former world number one in the junior ranks, displayed his ice-cool nerve to attack Thiem’s first and second serves, and also showed no fear in pressuring his rival towards the net on several occasions.

Sunday’s final will present Rublev with an opportunity to seal his fourth title of the year after previously winning events in Belgrade, Dubai and Marseille. He will play the winner of Saturday’s second semi-final between Sebastien Korda and Arthur Rinderknech in Sunday’s showdown on center court.

Thiem, meanwhile, will be buoyed by his performance to reach the semi-finals and showed no lingering effects from a nagging wrist injury which decimated the second half of his 2021 season.

The injury still appeared to hamper him throughout the first part of 2022 but he has now gone 14-14 in his 28 tour-level matches. He remains outside the world’s top 100 rankings but the 29-year-old will be confident of regaining his position in the world’s top 20 next year after his gritty performance in Gijon against Rublev.