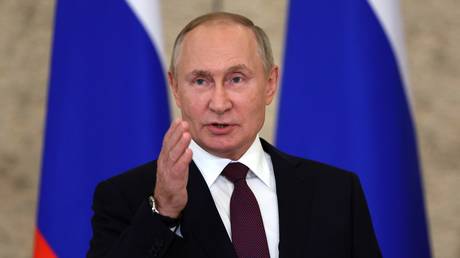 Russia’s actions regarding energy resources are aimed at ensuring market stability, and not creating obstacles for anyone, President Vladimir Putin said on Tuesday while meeting with his UAE counterpart, Mohammed bin Zayed Al Nahyan, in St. Petersburg.

The leader of the UAE is on an official visit to Russia to discuss cooperation between the two countries, as well as regional and international issues.

“We are actively working within the framework of OPEC+. I know your position, our actions, our decisions are not directed against anyone … They are aimed at stability in the world energy markets, so that both consumers of energy resources and those involved in their production, as well as suppliers feel calm, stable and confident. So that the supply and demand will be balanced,” Putin said.

Last week, the Organization of the Petroleum Exporting Countries and allies (OPEC+) agreed to an oil production cut of 2 million barrels per day starting in November. The reduction, which is the largest output cut since early 2020, was approved despite US pressure to pump more. It is expected to stem the latest slide in global oil prices.

US President Joe Biden expressed disappointment with the decision, and Treasury Secretary Janet Yellen called the move “unhelpful and unwise.”

Russian Deputy Prime Minister Aleksandr Novak, who attended the OPEC+ meeting, said that the output cut is necessary to balance the market before the seasonal decline in demand.

According to Kremlin spokesman Dmitry Peskov, Washington seeks to force through its decisions regarding the oil market and manipulate prices, even at the cost of destabilizing the global energy market.

Analysts interviewed by Bloomberg warn that the output cut may lead to a jump in oil prices above $100 a barrel and force the US to tap its strategic reserves. They also believe that Russia may introduce even larger output cuts than those announced by OPEC+ in response to the introduction of an oil price cap by the EU last week. Given the rise in oil prices, Russia’s oil export profits are unlikely to suffer even with production cuts, they say.