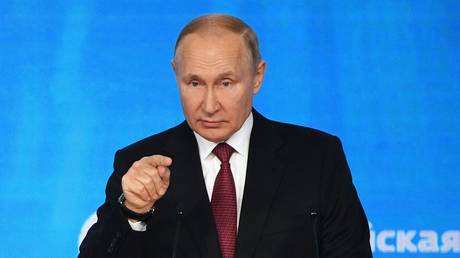 Russia could move the transit volumes lost through the damage to the Nord Stream pipelines to the Black Sea region, by establishing a ‘gas hub’ in Türkiye for EU supplies, President Vladimir Putin has said.

He pointed out it was possible to repair the damaged pipelines but that Russia and the EU should decide their fate.

“We could … thus make the main routes for the supply of our fuel, our natural gas to Europe through Türkiye, creating the largest gas hub for Europe in Türkiye,” Putin said, during an address on Wednesday to the Moscow Energy Week conference. “That is, of course, if our partners are interested in this. And economic feasibility also matters, of course.”

According to the president, Russian gas could still be supplied to the EU via one remaining part of the Nord Stream 2 pipeline that remains intact, but the ball was now in the EU’s court on whether it wanted this to happen. Russia could open the gas taps on that line if the bloc wanted it to, Putin stressed.

The Nord Stream 1 and 2 gas pipelines abruptly lost pressure last month, following a series of powerful underwater explosions off the Danish island of Bornholm. The incident caused massive gas leaks, with large volumes entering the sea. The ruptures are widely considered to be the result of sabotage by an unknown party.

The routes were designed to carry Russian natural gas directly to Germany, bypassing transit states, including Ukraine and Poland.

Moscow has called the incident a terrorist attack and said the US, a long-time critic of Germany’s reliance on Russian energy, stood to benefit most from the disabling of the routes, both politically and economically. Washington has denied any involvement. However, Secretary of State Antony Blinken hailed the incident as a “tremendous opportunity” for Europe “to once and for all remove the dependence on Russian energy.”

Neither pipeline was operational at the time of the breach. Berlin refused to certify the newer Nord Stream 2 after its completion last year, and Russia halted supplies via the older Nord Stream 1 in late August, citing sanctions-related maintenance problems.