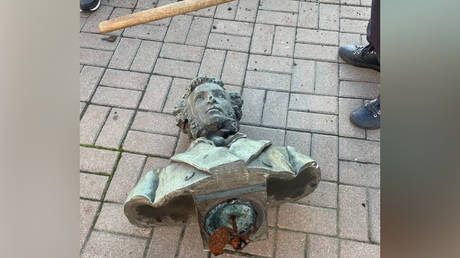 A monument in the center of Kiev to the iconic 19th-century Russian poet Alexander Pushkin was demolished on Tuesday, according to co-founder of the “Decommunization. Ukraine” project Vadim Pozdnyakov. The move comes as Ukrainian authorities continue their campaign of getting rid of the country’s Soviet and Russian past.

Pozdnyakov claims the statue, which was located in front of the National Transportation University, was a symbol of the “Russian world” for Ukrainian authorities. Its demolition has been dedicated to a Ukrainian lieutenant, activist and academic Denis Antipov, who died in May during a battle with Russian forces.

The heritage the country’s officials are trying to eradicate includes Russian language, street names and statues commemorating multiple cultural and political figures. Monuments dedicated to Pushkin have been particularly targeted, as the poet is widely considered to have been one of the key figures in developing modern Russian literature and advancing the Russian language.

“Pushkin is a symbol of Russian imperialism, the personification of the ‘great mighty Russian language,’ a marker of the Russian world and identity,” said Oleg Slabospitskiy, Coordinator of the Public Sector of Euromaidan civil action group, accusing the poet of propagating “Ukrainophobia” and “hatred of Ukrainians and Poles.”

In September, Slabospitskiy organized a campaign to vandalize all remaining Russian and Soviet monuments in Kiev while local authorities took down a bust of Pushkin installed in front of one of the city’s gymnasiums. A few weeks prior, a group of alleged neo-Nazis also attacked another bust of the poet located in one of Kiev’s metro stations, dousing it with red paint.

Statues of Pushkin have also been demolished in several cities across Ukraine. Earlier this year, a petition demanding to change all Pushkin Streets across Ukraine to the name of American writer Stephen King was published. However, it ultimately failed to gather enough signatures to be considered by the authorities.

The Ukrainian Education Ministry has also been making efforts to wipe any links to Russian literature in the nation’s school curricula, with Deputy Education and Science Minister Andrey Vitrenko stating in June that “everything that somehow connects us with the Russian Empire should be thrown out.” As of September 1, when Knowledge Day is celebrated in some former Soviet republics, a number of schools across Ukraine have completely ruled out the use of Russian in the classroom, even where it is the predominantly spoken language.

Moscow has repeatedly criticized Ukrainian authorities for what it considers to be “forceful Ukrainization and de-Russification” aimed at suppressing the rights of about a quarter of the country’s population.