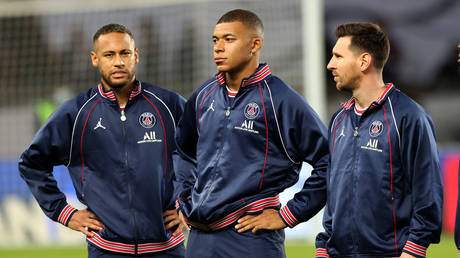 Kylian Mbappe could leave Paris Saint-Germain in January if the Qatari-owned club grants him his wish in the upcoming transfer market, according to reports.

Mbappe looked certain to join Real Madrid on a free transfer this May when the five-year deal he signed when arriving from AS Monaco in 2017 was set to expire.

But in a dramatic U-turn where he reportedly received pressure from French President Emmanuel Macron, the 23-year-old decided to extend his terms until 2025 at the Parc des Princes.

Five months later, bombshell reports from RMC in France and Marca in Spain claim that Mbappe is unhappy at PSG and wants to leave in January.

Madrid-based daily newspaper Marca writes that the relationship between Mbappe and his club “is now completely broken”, with it seeming “that there is no turning back”.

🚨🇫🇷 Kylian Mbappé wants to leave PSG in January. His relationship with the club is completly broken. He would like to join Real Madrid, but PSG would not let him leave for Madrid. @marca pic.twitter.com/nS3Ggutg4C

Marca says that Mbappe already asked to leave in July, and PSG were willing to accommodate the request as long as his next destination wasn’t Real Madrid.

Because of this, Liverpool is viewed as the “only feasible option” for Mbappe with the Premier League club previously registering interest in him.

Mbappe reportedly believes that PSG have betrayed him due to a series of promises they made in May to get him to renew his contract and snub Real Madrid.

Upon signing his new deal, it was claimed that Mbappe had been given increased power at PSG. This allegedly saw him have a say in former head coach Mauricio Pochettino being fired in addition to sporting director Leonardo, who was later replaced by Luis Campos.

Mbappe and Campos are well-acquainted from their time at Monaco together, but reports have spread on the same afternoon that Campos feels betrayed by PSG as well and wants to leave his post.

CBS reporter Ben Jacobs, who was one of the leading voices on Chelsea’s takeover by Todd Boehly’s consortium this summer, tweeted that PSG are “unconcerned” by reports that Mbappe has a fractured relationship with them.

They don’t see the star leaving mid-season due to a focus on winning the Champions League, though it is accepted that a massive offer would be considered if it is right for the club, Jacobs says.

Separate reports from Foot Mercato’s Santi Aouna allege that PSG’s hand would be twisted if someone came forward with a mammoth €400 million ($390 million) package for the Ballon d’Or hopeful.

Jacobs also claims to have been told there is no feeling Campos will quit despite some disagreements over how the last transfer window was handled.

Campos is planning for the January market, and is more invested in the Qatar Sports Investments group’s project than ever given that it has bought a stake in Braga in his homeland, Portugal.

Mbappe is set to feature for PSG on Tuesday evening when they take on Benfica in Champions League Group H.