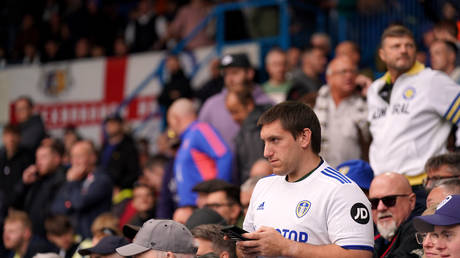 Leeds United’s home Premier League match against Arsenal had to be suspended for around 40 minutes on Sunday after a power cut at the Elland Road stadium.

When the scoreboard went blank at the West Yorkshire ground, Kavanagh and his fellow officials lost contact with VAR and goalline technology systems, thus forcing the players to wait on the pitch for around ten minutes.

Kavanagh then instructed the 22 men to head down the tunnel to the changing rooms, and the stadium’s announcer informed fans over the public-address system that the match had been suspended due to a “power cut.”

Leeds United vs Arsenal, play interrupted because of power cut, VAR and techs won’t work without power. Apparently, Flags and Whistles are totally useless, that’s where we are in history of football.
So, nobody get Tiger Generator for Elland Road abi? 🙄🙄 pic.twitter.com/PwFBRaTIeJ

Explaining the incident later, Leeds United said the issue was caused by a power cut suffered in the Beeston area where Elland Road lies two miles south of the Leeds city center.

When around half an hour had passed, the players returned to the pitch to warm up as it was announced that play would resume ten minutes later.

The match started back up again at 2:40pm local time, meaning the action had been paused for 38 minutes. It had been unable to continue because the Premier League handbook clearly states that games can’t be played without the use of VAR, which was introduced in the English top flight in 2019.

The incident occurred at a time when UK energy company National Grid has warned of three-hour power outages this winter amid a European energy and cost-of-living crisis.

The survey, conducted by the football reform group Fair Game, found that 63% of the 40 clubs asked – which included 12 EFL teams – would consider earlier kick-offs for their league matches on weekends to reduce energy bills if given permission, and therefore take advantage of diminishing daylight heading towards winter.

Meanwhile, Arsenal ended up winning the match on Sunday by a score of 1-0 thanks to a Bukayo Saka goal, thus maintaining the top spot in the Premier League.

One point and three places from the drop zone, Leeds occupy 15th in the table but have a game in hand over the majority of their rivals.