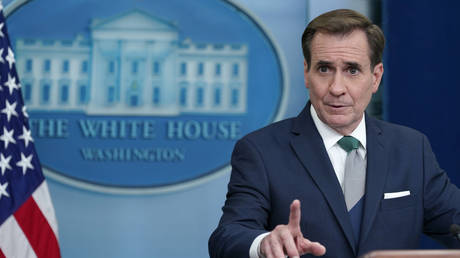 President Joe Biden’s warning of “Armageddon” was not based on any intelligence, spokesman John Kirby said

The White House has not seen any “new indications” that Russia plans to use nuclear weapons, National Security Council spokesman John Kirby told ABC News on Sunday. Kirby said that President Joe Biden’s warning of a “direct threat” of nuclear “armageddon” was unfounded.

“We just simply haven’t seen an indication that [Russian President Vladimir] Putin has either made a decision to use nuclear weapons in Ukraine, or has done anything to get closer to that decision making process,” Kirby told the US broadcaster.

The US has not “seen anything that would give us pause to reconsider our own strategic nuclear posture,” Kirby added.

Putin has not threatened the West or Ukraine with nuclear strikes, but has stated that Russia would defend its territory – including four former Ukrainian regions that joined the Russian Federation last week – with “all the means available to us.”

That comment set off a wave of nuclear panic in the West, with former military leaders discussing a potential NATO attack on Russia, Ukrainian President Vladimir Zelensky calling for pre-emptive strikes on Moscow, and US Secretary of State Antony Blinken threatening Russia with “horrific” consequences if it deploys nuclear weapons.

Amid this discussion, Biden told supporters on Thursday that “we have a direct threat of the use [of a] nuclear weapon if in fact things continue down the path they are going,” warning that “the prospect of Armageddon” is more realistic than at any point since the Cuban Missile Crisis.

Kirby downplayed Biden’s statement. “His comments were not based on new or fresh intelligence,” Kirby told ABC. “What the president was reflecting was that the stakes are high right now given what’s going on on the battlefield in Ukraine,” he continued, citing Putin’s “irresponsible and reckless comments.”

Prior to Kirby’s interview, the Pentagon also stepped in to issue a similar assessment. “We don’t assess that President Putin has made a decision to use nuclear weapons at this time,” military spokesman Brigadier General Patrick Ryder told reporters on Thursday. However, Washington treats Moscow’s nuclear capabilities “very seriously,” Ryder added.