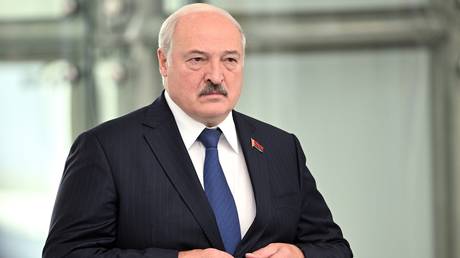 Belarus is deploying the grouping as the nation is put on high terrorism alert, the country’s president has said

Minsk has begun deployment of a joint Russian-Belarusian military force on its territory, President Alexander Lukashenko told journalists on Friday, citing “heightened tensions” on its borders, which prompted the nation to issue a high terrorism alert.

“We have launched the procedures, involving the deployment of the allied force grouping,” the president said, adding that its “core” would be formed by Belarusian troops and “supported” by Russian units. “Everything is going according to plan,” the president remarked.

Lukashenko did not reveal where exactly the troops are to be deployed. Neither did he reveal the total strength of the “allied force.” Its Belarusian “core” would include “some 70,000 soldiers,” the president said. He added, though, that one should hardly expect a large Russian contingent to be sent to serve on Belarusian soil amid a protracted conflict between Moscow and Kiev.

One should not reasonably expect Moscow to send “10,000-15,000 soldiers” to Belarus, Lukashenko said, hinting that the Russian part of the allied force might be smaller. Earlier this week, he announced that an allied force could be deployed to Belarus’ western borders, citing a potential threat from NATO and Belarus’ western neighbors. At that time, he also said that the strength of the Russian military contingent in Belarus might amount to “several thousands” of soldiers.

In early October, Lukashenko explained his nation’s role in Moscow’s conflict with Kiev. Minsk’s participation in the conflict is limited to self-defense and to having Russia’s back, he said at that time. On Friday, the Belarusian president also said that the nation’s troops would prevent Ukraine from any attempts to attack Russia through Belarusian territory.

“If we are dragged [into the conflict], we will be able to hold out. We will defend this operations line,” Lukashenko said. The president’s words also came as Belarusian Foreign Minister Vladimir Makei told Russia’s Izvestia newspaper that the nation’s security forces were put on high alert and were ready “to respond to any threats that may arise from neighboring countries.”

According to Makei, “some neighboring countries were planning provocations, as far as involving the seizure of certain areas of the Belarusian territory.” Officials in Minsk had earlier accused Kiev of blowing up bridges and amassing tens of thousands of troops along the Ukraine-Belarus border. Lukashenko claimed then that Ukraine was “not just discussing but … planning” an attack on Belarusian territory.

Ukrainian President Vladimir Zelensky rejected the accusations and in turn claimed that Minsk’s statements were a cover-up for a potential offensive by Belarus. He also called on the G7 countries to send “international observers” to the border between the two nations.

No More Need For Massive Strikes On Ukraine – Putin