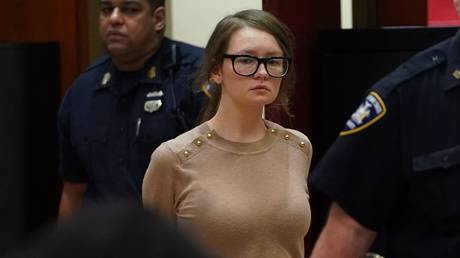 Anna Sorokina, better known as faux socialite Anna Delvey, is barred from social media while she fights deportation from the US

In addition to posting a $10,000 bond, the German immigrant is banned from posting to social media, where thousands of fans are following her legal travails, and must provide a residential address where she will remain under “24-hour confinement,” complete with electronic ankle bracelet, while her deportation case proceeds through the courts.

US Immigration Judge Charles Conroy argued that Sorokina’s status as a heavily-scrutinized public figure, plus her intentions to pursue “legitimate employment” in the US, were a sufficient hedge against any potential flight risk.

Asked about her plans as she entered the Manhattan apartment building where she would be living on de facto house arrest for the foreseeable future, Sorokin was noncommittal, telling reporters, “we’ll have to just wait and see” – though she denied she would be tempted to go outside or use social media.

Lawyers for the Russian-German con artist had demanded her release last month, arguing the immigration authorities had violated her constitutional rights by failing to hold timely hearings every six months as detainees are entitled to. While she could have walked free if she agreed to be deported back to Germany, Sorokina was intent on remaining stateside.

Sorokina has been in ICE custody since March 2021, charged with overstaying her visa when she first arrived in the US in 2013. She was picked up by the immigration authorities less than two months after her early release from prison, where she was serving a 4 to 12-year sentence for grand larceny and theft of services.

Born in the final year of the USSR in decidedly modest circumstances, Sorokina had reinvented herself as the heiress to a $67 million German oil fortune by the time she arrived in New York City, grifting her way into rarefied social circles despite having hardly any actual money. By the time she was arrested, Sorokin had scammed some $275,000 from luxury hotels, banks, and wealthy friends she had attracted with her colorful – if wholly fictional – ‘Anna Delvey’ persona, and had nearly managed to clinch a $22 million loan to launch an “art club” in Manhattan.