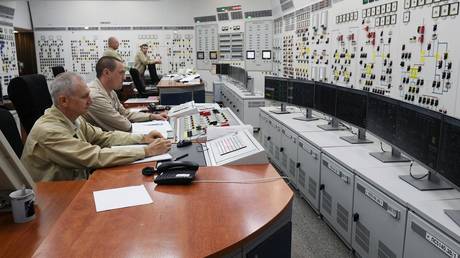 The Zaporozhye site, formerly a Ukrainian entity, is now running on Russian electricity

The Zaporozhye Nuclear Power Plant is receiving Russian electricity after being taken off Ukraine’s electrical grid, according to an adviser at the state-owned operator. The site, along with the city of Energodar, sits near the frontline, with Moscow and Kiev accusing each other of shelling the facility.

“The city has been connected to the grid, and the plant has a new power supply as well,” Renat Karchaa from Rosenergoatom told Russia 24 TV on Tuesday.

The change was also reported by Vladimir Rogov, a senior official in Russia’s Zaporozhye Region, where the biggest nuclear power plant in Europe is based.

“The nuclear plant has been connected to power lines from our side,” Rogov told RIA Novosti news agency.

“However, it is [too] early to talk about restarting the plant’s reactors at the moment,” he later wrote on his Telegram channel.

The last of the plant’s six reactors was shut down a month ago after power lines were damaged by the shelling. The facility was then forced to rely on diesel generators.

Russia has accused Ukraine of “nuclear terrorism,” repeatedly warning that the shelling could trigger a nuclear disaster, similar to the incident in Chernobyl in 1986. Kiev has claimed that Russian soldiers have used the plant as cover.

Zaporozhye Region was seized by Russian forces shortly after Moscow launched its military operation in the neighboring state in February. Along with three other former Ukrainian territories, it was admitted to Russia after the accession was backed in a referendum last month.