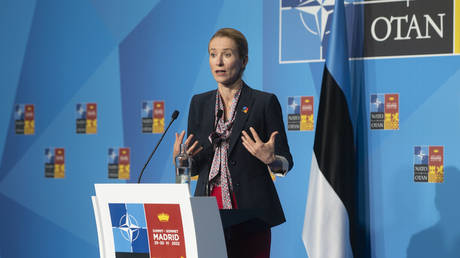 European unity on anti-Russian sanctions is faltering, Estonian PM Kaja Kallas told the UK Telegraph on Saturday – if only because the bloc is running out of targets for its economic warfare.

“It’s becoming more and more difficult to put the sanctions in place. And there are not many elements left that we can sanction. That’s the problem,” she lamented.

Kallas also blamed “the fatigue of war” and “domestic problems kicking in” for Europeans’ waning interest in sanctioning Russia.

The US and EU have been targeting the Russian economy with sanctions since the start of Moscow’s military operation in Ukraine in February, but while the initial rounds were unanimously approved, restrictions on the purchase of Russian oil and gas have proved more of a sticking point, given Moscow’s key role in supply.

Embracing the sanctions regardless of collateral damage to EU economies and citizens has left the bloc with sky-high energy bills and galloping inflation. While Kallas reassured The Telegraph that “the majority of people understand that inflation is like a war tax,” declaring “we pay this in euros whereas the Ukrainians are paying in human lives,” protests against the soaring cost of living and what is widely seen by critics as a NATO proxy conflict have arisen in Austria, Italy, France, and the Czech Republic, and are likely to intensify as winter approaches.

Hungarian PM Viktor Orban has vehemently denounced the “economic self-harm” wrought by the energy sanctions, while state secretary for international relations Zoltan Kovacs likened the measures to “dropping an atomic bomb on the Hungarian economy and also on the European economy.” Budapest was able to secure an exemption to an oil price cap introduced with the latest sanctions package as it receives gas via pipeline and not by sea, though many EU nations no longer have the option of piping in Russian gas following the sabotage of Nord Stream 1 and 2.

Among EU nations, Estonia saw the sharpest increase in energy prices in July over the previous year. This has not dampened its elites’ enthusiasm for the conflict in Ukraine, however. As of August, Tallinn had sent more military equipment to Kiev as a proportion of GDP per capita than any other country, shoveling €250 million ($243 million) in military aid to the nation it wants as a NATO member, and Kallas on Friday urged wealthier countries to “find something that they can give” to Ukraine.

Since the start of 2022, Kiev has received over €80 billion ($78 billion) in foreign aid commitments, according to Statista.