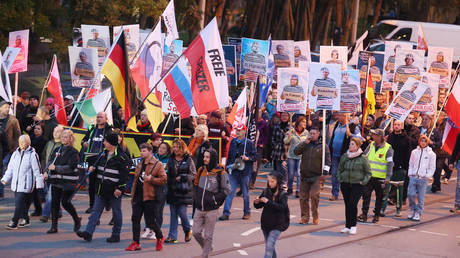 Skyrocketing energy costs could lead to a rise in extremist sentiment across Germany, Bavarian President Markus Soder told Bild am Sonntag on Sunday.

“The mix of crises, such as energy and coronavirus, can lead to overstrain and destabilization of democracy,” he said, urging “democratic parties” to “take a clear position, argue less, and encourage citizens.”

Soder pointed to the increasing electoral success of the right-wing AfD party as proof that extremism is on the rise. He argued for a cap on gas prices and financial relief for citizens, as well as aid to small and medium-sized businesses to head off growing anti-government sentiment. Some 15,000 German stores are reportedly on the brink of closure due to spiraling energy costs, according to Der Spiegel.

Economy Minister Robert Habeck and Finance Minister Christian Lindner must also quit arguing over the future of nuclear power in the country, Soder continued. He insists the government should extend the operation of the remaining nuclear plants through at least 2024, as Lindner has proposed, and has called on Chancellor Olaf Scholz to broker a peace between the two officials. Germany began shutting down its nuclear reactors in 2011 following the Fukushima disaster in Japan but has recently reconsidered the move in light of record gas prices exacerbated by the sanctions on Russian supplies.

While former Chancellor Angela Merkel had promised to phase out all 17 of Germany’s nuclear reactors by the end of 2022, three remain in service. Lawmakers recently agreed to keep at least two of those on standby status, should the plan to make it through the winter by burning coal prove insufficient to meet demand.

In August, Stephan Kramer, president of the Thuringian Office for the Protection of the Constitution, predicted a “winter of fury” in which “violent” extremists would hijack “legitimate” protests against the energy crisis. He also expects higher unemployment and other economic issues, warning broadcaster ZDF that mounting economic pressures combined with the strsess of the pandemic and the conflict in Ukraine could shake the nation when the temperature drops.

While both Soder and Kramer have argued that “the trust of the population in state institutions and authorities” is crucial to maintaining order come winter, just 38% of the population believes Chancellor Scholz is fit for the top job, according to a poll conducted last month – and that was an improvement over public sentiment in August. Habeck and Lindner rate even lower, with approval ratings of 35% and 33.6%, respectively.