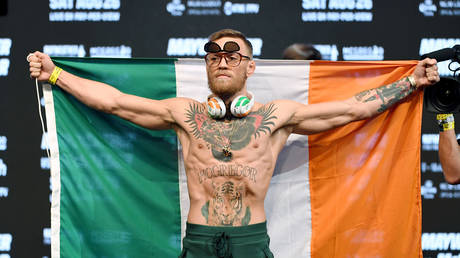 Irish UFC superstar Conor McGregor has shown support for Ireland’s women’s football team, who were forced to apologize after footage appeared online of them singing a song glorifying the IRA as they celebrated qualification to their first-ever World Cup.

Vera Pauw’s side earned their passage to next year’s tournament in Australia and New Zealand with a 1-0 playoff win away to Scotland at Hamden Park this week.

However, the team and the Football Association of Ireland (FAI) were quickly forced into damage-control mode, after a brief clip of several members of the team singing a section of the song ‘Celtic Symphony’ by Irish band The Wolfe Tones went viral on social media.

Here is footage of the Republic of Ireland players singing ‘Ooh ah up the ‘Ra’ in their dressingroom. The manager, players and FAI have subsequently apologised #rtesoccer https://t.co/k3XLuHblmU pic.twitter.com/KhC9YTbn3J

The footage showed team members jumping up and down while singing, “Ooh, ahh, up the ‘RA” – a term commonly associated as being in support of the Irish Republican Army (IRA), an offshoot of which, the Provisional IRA, was responsible for numerous terrorist attacks on the island of Ireland throughout a period known as ‘The Troubles’ from 1969 to 1998.

Several members of the Irish team have subsequently issued apologies, with the player who recorded the footage said by team manager Pauw to be distraught at the negative attention it has received.

Dutch coach Pauw later offered an apology: “I’m responsible for the players, so on behalf of the players and the staff and the association, I would offer my sincere apologies to all the people that we have hurt.

“That [respect] is the first thing in our line, the first sentence, in my team everybody has respect because there is always respect to everybody around us. So, we are more disappointed in ourselves that we have overstepped that rule than anything else, and we are so sorry that we have hurt people.”

However, McGregor, who is known to be a fiercely patriotic Irishman, might well be of the opinion that Pauw has spoken too soon.

The former UFC double-champ posted a tweet referencing the issue in which Sky Sports News presenter Rob Wooton asks a member of the Irish squad if she would like to apologize on behalf of her teammates – only for the clip to be hijacked by McGregor’s infamous riposte from inside Madison Square Garden in 2016, when he captured his second UFC title from Eddie Alvarez.

“I just want to say from the bottom of my heart,” McGregor says in the clip.

“I’d like to take this chance to apologize… to absolutely nobody!”

McGregor’s video has so far been viewed by more than 1.1 million people, though it remains to be seen if it will be enough for both UEFA and Police Scotland, who are both understood to have launched separate investigations into the incident.