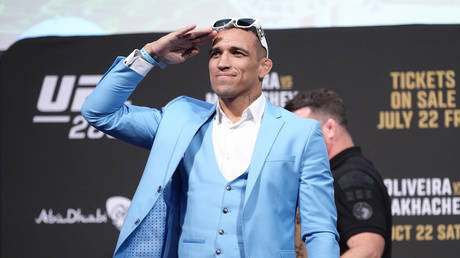 Ex-UFC lightweight champion Charles Oliveira took to Instagram to address rumors he will not show up for the main event at UFC 280 in Abu Dhabi on October 22.

Oliveira was stripped of the 155 lb title on the scales ahead of UFC 274, after coming in half a pound over.

Finishing his opponent Justin Gaethje in front of his home fans in Phoenix, the Brazilian set up a mouthwatering clash with rising contender Islam Makhachev for the vacant strap.

Attempting to play mind games with the Sao Paulo native, Makhachev, who has 29-0 lightweight legend Khabib Nurmagomedov in his corner, has constantly doubted that Oliveira will make fight night and reiterated these claims before the weekend.

“Two weeks before the fight, [and] Charles and his team [are] not in Abu Dhabi yet … should I start [to] worry?” the Dagestani asked on Twitter, sharing an image of a headline and subhead that claimed ‘Do Bronx’ would touch down in the UAE 20 days before the show.

On Instagram on Saturday, Oliveira coolly addressed Makhachev indirectly. He uploaded a photo of himself in a blue suit and sunglasses at ringside, holding up an official UFC 280 octagon-shaped card which read: “I’m coming to Abu Dhabi.”EditDelete

2 weeks before the fight, Charles and his team not in Abu Dhabi yet., should I start worry ? 🤔🤔🤔 pic.twitter.com/pyOBMo9D4O

In the caption, Oliveira wrote in Portuguese: “Calm, Calm. Daddy is on his way.”

“Hello, Abu Dhabi,” he added, along with a string of smileys holding a finger up to their mouth.

A couple of hours later, he then posted a photo of himself and his team in Sao Paulo’s Guarulhos International Airport claiming to be on their way to UFC 280.

The build-up to the main event there has seen back and forth bickering between the two camps, with Oliveira predicting that perceived “arrogance” about beating him will “kill” Makhachev and Nurmagomedov.

“I’m going to your house, my friend, to fight against you [Makhachev] and make history and continue as the lightweight champion. Listen well to what I’m saying to you. Your arrogance will kill you and drown you,” Oliveira warned in a rant to Brazilian media.

“You’re talking a lot of s**t, criticizing [me] and saying a lot of things. And I’m just here minding my own business and respecting [you] like I’ve always done with all of you.

“But pay attention – everything that you’ve said in the media is coming [your way]. So don’t complain later. That’s all I have to say,” Oliveira added.
Makhachev and Nurmagomedov’s agent, Ali Abdelaziz, went on Twitter to try and defuse the row.

“I just heard you said we are arrogant. We know you’re a great champion and [a] great human being, we know you’re very tough,” the Egyptian tweeted, tagging Oliveira.

“This is not personal,” Abdelaziz insisted. “October 22, it is going to be a great fight and we will see who is the champion.”

‘No Indication’ Russia Will Use Nukes – White House