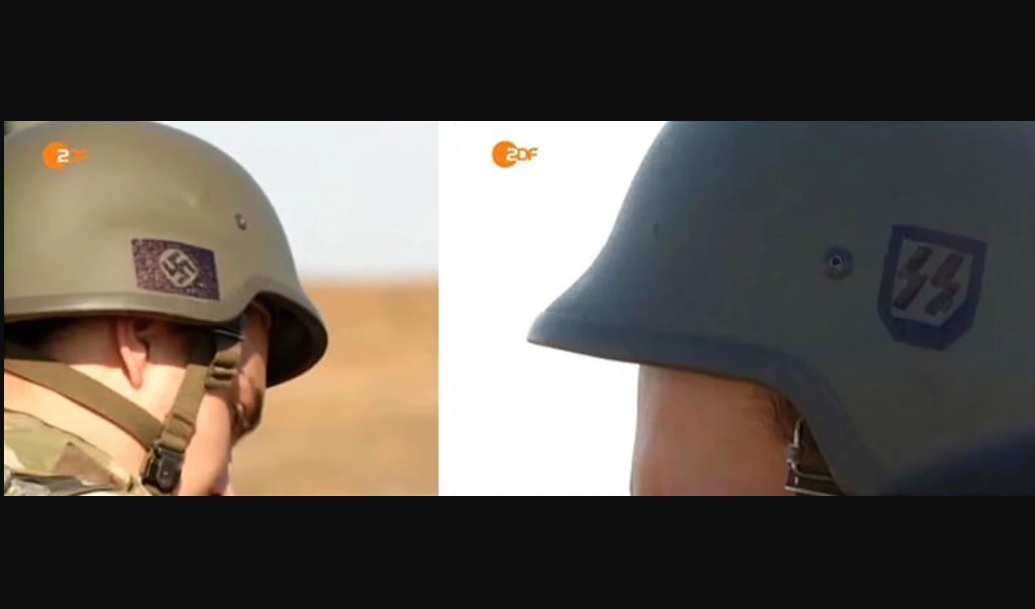 In a ZDF report on the fragile cease-fire in eastern Ukraine, images were shown of soldiers wearing combat helmets with SS insignia and swastikas.

Ukrainian soldiers with Nazi symbols on their helmets, including the swastika and the SS runes of Hitler’s infamous black-uniformed elite corps

Germans were confronted with images of their country’s dark past on Monday night, when German public broadcaster ZDF showed video of Ukrainian soldiers with Nazi symbols on their helmets in its evening newscast. In a report on the fragile cease-fire in eastern Ukraine, Moscow correspondent Bernhard Lichte used pictures of a soldier wearing a combat helmet with the “SS runes” of Hitler’s infamous black-uniformed elite corps. A second soldier was seen with a swastika on his gear. “Volunteer battalions from nearly every political spectrum are reinforcing the government side,” the ZDF correspondent said in his report.

The video was shot last week in Ukraine by a camera team from Norwegian broadcaster TV2. “We were filming a report about Ukraine’s AZOV battalion in the eastern city of Urzuf, when we came across these soldiers,” Oysten Bogen, a correspondent for the private television station, told NBC News. Minutes before the images were taped, Bogen said he had asked a spokesperson whether the battalion had fascist tendencies. “The reply was: absolutely not, we are just Ukrainian nationalists,” Bogen said.

Australian National Review – Russell Brad Discussing The Problem With Centralized Technology For Farming, Like What Bill Gates Is Trying To Do To American Farmland