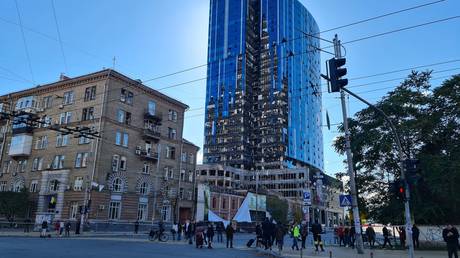 The building housing Germany’s consulate in Kiev was damaged during a massive missile strike on the Ukrainian capital carried out by the Russian military on Monday, Germany’s Foreign Ministry has stated. However, according to officials in Berlin, no diplomatic personnel was hurt in the attack as the building has not been in use since the start of Russia’s offensive in late February.

The ministry posted a tweet reading: “A building in #Kyiv, which also houses the German visa office, was damaged by rocket fire this morning.” The message went on to clarify that the office has not been used by German diplomats for months.

“Our colleagues at the Embassy in Kyiv are well,” the tweet concludes.

A building in #Kyiv, which also houses the German visa office, was damaged by rocket fire this morning. Since the beginning of Russia’s war of aggression, these offices have not been used by our embassy. Our colleagues at the Embassy in Kyiv are well. (2/2)

According to Lambrecht, one of the units will arrive in the country in the near future, with three more expected to be shipped next year.

The missile strikes came days after a truck exploded while crossing the Crimea Bridge, which joins the peninsula with mainland Russia. Part of the structure was destroyed as a result.

On Sunday, President Vladimir Putin called the blast a “terrorist attack” carried out by the Ukrainian intelligence services.